Grateful for a busy summer

Every once in a while I find it’s really nice to just step back and look at my life, reflecting with a spirit of gratitude. For I am truly thankful for the gift of music and the ability to continue to make it with good friends and people I love.

In the spirit of reflecting, here goes a little recap…

It’s been a good run lately playing several cool shows/venues with Terri Clark, Michelle Wright and RyLee Madison and enjoying a couple weeks of great vacation time and our shared birthday in Nova Scotia among family and friends.

Among the gigs has been Canada Day on Parliament Hill in Ottawa, Ontario, where we played to 80,000 people and were broadcast on the CBC network across Canada and also met the Prime Minister and Governor General of Canada. We shared the stage with Metric (http://ilovemetric.com/) and Carly Rae Jepsen and had some great hang time with all the musicians on the day of show and at the after party. Terri also played the Budweiser Blank Ticket concert at the Calgary Stampede, surprising thousands of crazy Stampeders with a fantastic show.

While Terri and the rest of our band and crew flew home, I flew from Calgary, AB over to Moncton, NB and connected with Michelle Wright and band for a show in Prince Edward Island at the Cavendish Beach Music Festival. And to make it even better, I was able to make music with my wife RyLee Madison in an afternoon full band performance on one of the festival’s side stages and an evening acoustic set in the VIP tent sandwiched between concerts by Little Big Town and Kenny Chesney. (Kudos to Michelle Wright for letting us use all the guys in her band on RyLee’s performance!)

After some much-needed vacation time with my wife in Nova Scotia, it was back to work. I’m just home from a few crazy days of travel in planes, passenger vans and various hotels after playing three great shows with TC. We did two shows in the beautiful state of Washington at Watershed Fest at the Gorge Amphitheater, one of the most beautiful outdoor concert venues I think I’ve ever seen and had the privilege of playing. After sharing the bill with Thompson Square, Luke Bryan, Shooter Jennings and Toby Keith, we trekked thru more airports and hit the stage at Big Valley Jamboree in Camrose, AB, sharing the stage with Big & Rich and Tim McGraw.

Here is a picture of yours truly on the video wall at Watershed Fest last week at the Gorge Amphitheater in George, WA…

…and an impromptu picture that Terri took of the band during one of several airport experiences. 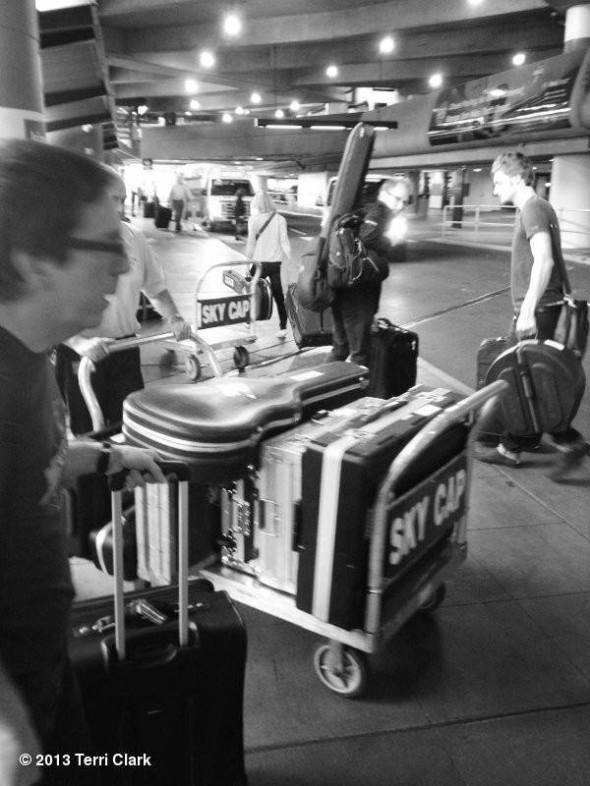 I’m back in Nashville for another week or so. Next up, an appearance at the Grand Ole Opry with Terri Clark on Tuesday, August 13. Then I will be setting aside my bass for a few days and picking up the acoustic guitar for a couple house concerts in my home state of Indiana with my uber-talented wife, RyLee Madison. We will be performing in Greenfield, IN on Friday, Aug 16 and then jumping up to my hometown of Winamac, IN for a concert on Saturday, August 17. And at the end of the month (Sat, Aug 31) Terri Clark and crew will be dropping in on the legendary Billy Bob’s in Ft. Worth, TX for a big show… and some Mexican food! Join us if you’re in the area!

Until next time, I’ll remain grateful.

This entry was posted on August 7, 2013 by Clay Krasner. It was filed under Uncategorized .